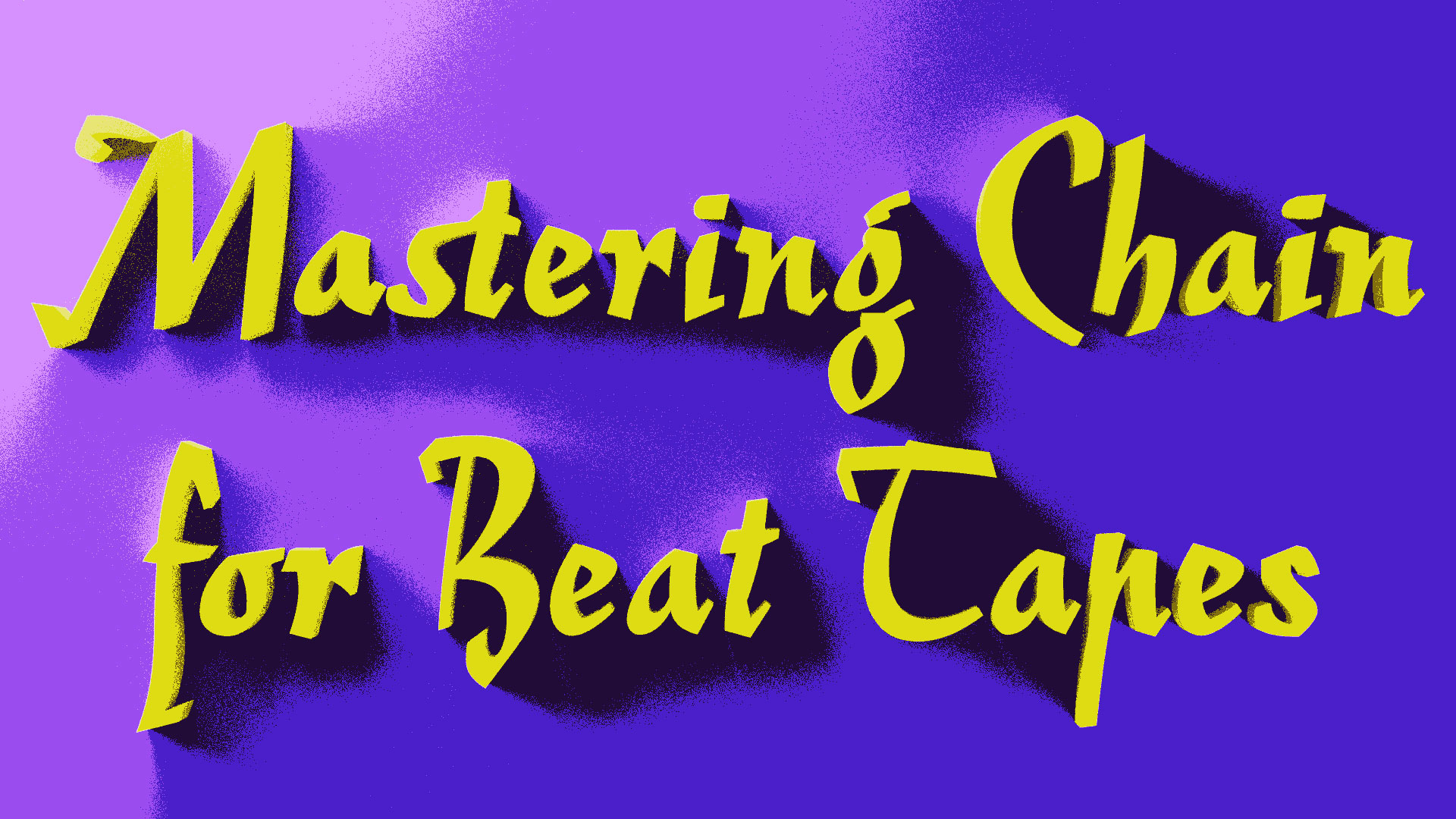 This is a guest post from Tiago Frúgoli, a beatmaker and educator living in São Paulo, Brazil, and an expert user of Goodhertz plugins. Find out more about Tiago in this video interview.

I never intended to be a mastering engineer, but over the years, between my own music, albums on Ukiyo Beat Tapes and projects from friends like SonoTWS, I found myself mastering several beat tapes. When I master my own music, I make all artistic decisions while mixing, so all I want in the mastering stage is to get the album to sound cohesive, regarding the tonal balance and volume. When mastering for other people, it’s important for me to understand if they expect me to bring some character to the music or not.

In this blog post I will demonstrate how I created a mastering signal chain based on Goodhertz plugins. Beat tapes have a specific sound: there’s usually no vocals (except for samples), the sound usually leans towards low-fidelity, and there aren’t as many dynamics as in a song-oriented album. Even so, one could apply and adapt this signal flow to any kind of music.

Please remember: everything described here is a starting point. Adjustments are made depending on the unmastered material, mainly based on listening and metering.

The first plugin on my mastering chain is Midside. I often use the Mono Below 125 Hz preset, to make sure the lows are on the center of the mix. Since low frequencies are mostly omnidirectional, it’s usually best to have them at the center (unless you are creating something exclusively for headphones, for example – and it would still sound odd even then). Having the low frequencies spread out to one side could also create mechanical problems if the music is being pressed to vinyl (there’s another preset in Midside that is specifically for vinyl mastering).

If the tracks on a project sound very different from one another, Midside might also help by making it easy to apply changes (either gain or eq changes) to the mid and side signal. Some problems could be fixed that way and could keep me from having to go back to the mix.

Next up is Tone Control. Like I mentioned before, I am usually trying to be transparent while mastering, so I’m working with HQ Mode turned on and Linear Phase at 100%.

A high pass filter at 30 Hz (or lower) can be used to remove subsonic frequencies that we don’t usually hear. Removing those can help the speakers properly deliver what we do hear and can also help avoid mechanical problems on vinyl. It’s also an easy fix for DC offset problems.

Again, EQ’ing will depend mostly on cohesiveness between all tracks from the project. I’ll usually make corrections by adding or removing a few dB in the high and low frequencies, using gentle slopes. Whenever I feel I have to make any drastic changes, it’s probably best to go back and fix it in the mix. If there are specific frequencies I need to remove, without affecting the whole low or high band, I’ll have a stock EQ plugin at this point on my mastering chain for that.

On the contrary, if I feel the need to make a track slightly darker or brighter, but don’t want to change the overall sound, I’ll use Tiltshift instead, since that’s exactly what it does. No presets, just open it up and move the fader left or right, very subtly.

After that comes gain reduction. The three plugins on this stage are going to work together. The compressor I choose depends very much on how the music sounds, in terms of character. Some producers add a lot of compression while mixing — no need to add more in those cases. I do ask them to send tracks with no limiting on the master bus, as that would be like skipping the mastering phase.

Vulf Comp is a compressor I like to use on my master bus while mixing a track. In fact, since it’s a compressor that adds a lot of character, if I’m using it, I’d rather have it on the master bus before I even start to mix, so my mixing decisions will be based on what I hear through the compressor. But back to mastering. The dry/wet fader on Vulf Comp is perfect for bringing some of this plugin’s flavor, but in a controlled way. A good starting point is the 2-Bus Glue (Parallel) preset. I’ll usually adjust the Digital Reference Level and the Dry/Wet faders based on what I’m hearing.

A more punchy and less pumping alternative for compression is Faraday Limiter. In spite of its name, it is a compressor if you use it with lower ratios. Goodhertz’ Principal DSP Engineer, Devin Kerr, who is also an accomplished mastering engineer, created a couple of mastering presets for this compressor. I usually start off with 2-Bus Glue w/ HPF if I don’t want the low end to be affected by compression (the opposite of Vulf Comp, that is). I start by moving the threshold all the way up to 0 dB, then bring it down while checking for how many dB’s I am compressing – and most important, by listening. I like to disable the auto make-up, so that when I bring the threshold down, I can hear more clearly how compression is affecting my signal. Another option would be to start off with a 2:1 ratio, high attack and low release times, and make adjustments by ear, checking for gain reduction.

The part where I do add some character (even if subtly) is with tape simulation. That depends on how the track was sent and what the artist/producer wants the album to sound like. Some people want the sound they sent me, just more well-balanced. Other people send me their files and expect me to add some color to it. My starting point for this section is Wow Control‘s 15 IPS Analog Only preset. If I don’t want the frequency spectrum to be affected, I’ll pull Color down to 0%. On the contrary, if I do want a specific cassette sound for the tonal balance, I’ll start with Cassette Analog Only Either way, I’ll adjust the Saturate fader so that a little tape clipping occurs. Not so much that it sounds distorted, but enough to help me need less limiting on the next plugin. It’s important to keep in mind that, even if Color is at 0% Saturation will happen differently on different types of tape emulation.

I have also been experimenting with the tape emulations on the newly released Tupe. There are two reel-to-reel emulations, and two 4-track cassette emulations. Tupe’s Tape Amount slider is very handy when there is the need to make the tape sound subtler (or even more pronounced than it would be in actual hardware). That, combined with Tupe’s Drive and Bias faders will offer a wide range of sounds. Even more important, though, is the Emphasis section, which gives me the possibility of making tape distort more or less on specific frequency ranges.

The third plugin in my compression stage is Faraday Limiter — and this time it’s actually used as a limiter. Starting with the Tamed Transients preset, I’ll bring the Threshold all the way up to 0 and adjust it so that I have some limiting (usually not more than 3 dB) but I still like what I’m hearing. I’ll also turn Auto Gain off and adjust the Out fader manually.

After compression I have a meter plugin, where I’m checking for True Peaks and Temporary LU. I have a target LU level I want to achieve (usually around -13), and I’m compressing and limiting in order to achieve that loudness level, while making sure that my peaks don’t go above -1, for safety. It takes a while of going back and forth on my three gain reduction plugins while checking my meters and comparing with other tracks mastered for the same album.

The last section is purely technical. First, I have Good Dither, with the CD Master preset on, unless I’m mastering for a different bit depth than 16 bit. And lastly I have CanOpener Studio, for two reasons: checking my masters on headphones (for that I use Crossfeed at 100% and Angle at 60º), and being able to check my masters in Mono. It’s very important though, that you turn off the plugin while exporting, or have it on a monitor out. This one is intended to help you make better decisions when listening to headphones, as it brings the sound closer to what will come out of the speakers, but not intended to be used on the actual bounced file.

Mastering isn’t necessarily the most fun or creative part of making a track or album, but it can be very rewarding to master your own projects and adjust the loudness and tonal balance to your taste. Practicing mastering can also help you better communicate with a mastering engineer, in case you have someone else mastering one of your projects. And no, you don’t necessarily need the highest-end gear to master a track. Of course, good speakers and acoustic treatment will only help. It is important, though, that you use the tools you know best – in my case, Goodhertz plugins.

Tiago Frúgoli is a beatmaker living in São Paulo, Brazil, and an expert user of Goodhertz plugins.